MORE DETAILS ON THE SECOND HEAVEN AND THE MARINE KINGDOM
After Lucifer and I left the First Heaven, we traveled to the Second Heaven which is a kingdom in the firmament ruled by the Queen of Heaven, who is responsible for commissioning humans to create false religions. 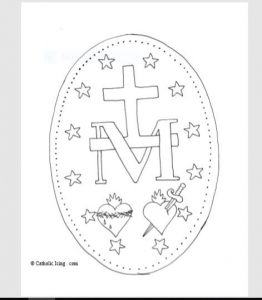 The pentacle of the Queen of Heaven depicts 12 stars with a cross on top of the letter M and this M is the abbreviation of her name, Mary Marguella. She is called by many names such as the Blessed Virgin Mary, the Mother of God, Our Lady of Fatima, Mystical Rose, Our Lady Star of the Sea, Immaculate Conception, etc.
The Queen of Heaven Mary Marguella has twelve spirits surrounding her throne, represented by 12 stars. These 12 stars are 12 fallen angels that she sent out on missions all the time. The mission of these 12 spirits is giving false revelations to humankind.
She entered into covenants with humans so that they can be worshipped on earth like gods through false religions. These are also false prophets and spiritual leaders in religions like Rosicrucianism, Freemasonry, Kimbaguism, Islam, Baha’ism, Buddhism, Yoga and all the satanic spiritual movements.
As I was traveling with Lucifer, he said to me that on Earth, there are many of his churches, religions and spiritual movements.
He said to me, “You have to choose a church or religious movement connected to my kingdom and my churches and religions can be identified by hidden signs and symbols which you must know.”
Jeremiah 10:2 This is what the LORD says: “Do not learn the ways of the nations or be terrified by signs in the heavens, though the nations are terrified by them.
Although the nations are terrified by them, in fact, false churches wear garments and uniforms with drawings of these signs and symbols.
Some of these signs and symbols can be seen in the churches’ logos and banners.

We have this sign here of a cross superimposed by the letter S. This S is Satan above the cross. Christian sects call this sign Holy Spirit but that is false. It is a false principle guiding these false churches and false religions which means Satan is the opponent of the preaching of the cross.
The main feature of an apostate church is the downgrading of the name of Jesus. We see it with the Jehovah’s Witnesses sect where the name Jehovah is emphasized above the name of Jesus. It is the same thing in the Catholic Church where Mary is given more prominence than Jesus or the Holy Spirit. She is called Co-Mediatrix and Co-Redemptrix. It is the same thing with Brahamism and Kimbaguism. It is their spiritual leaders that are exalted above Jesus. 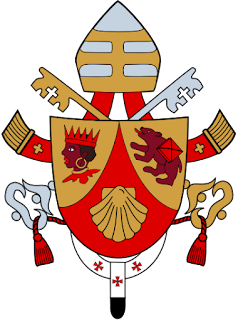 In these false religions, there is also this symbol called the Mystical Key. It is supposed to be the key that Jesus gave to Peter according to the Catholic Church but that is not the case. You can see this key on the Pope’s coats of arms. This is symbolic of false religions because in false religions, spiritual leaders will claim that unless you believe his message, you are lost. The Catholic Church teaches infallibly, “extra ecclesiam nulla salus,” or, “outside the Church there is no salvation.”
This is the case for Jehovah’s Witnesses, Brahamism, Kimbanguism.
The Bible refers to this mystical key when Jesus said to the Pharisees, “Woe to you, scribes and Pharisees, you hypocrites! You shut the kingdom of heaven in men’s faces. You yourselves do not enter, nor will you let in those who wish to enter.” (Matthew 23:13)
They have the religious spirits with dogmas and credos and diabolical doctrines and when you follow them, the door of heaven is closed for you. 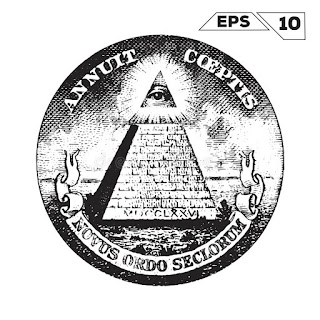 This symbol here is a pyramid that is in the American dollar and the eye on top of the pyramid is showing the top class, the Elites of the human society. This is a symbol of the Illuminati which is a branch of the Freemasons. In this satanic sect, they do rituals and human sacrifices. 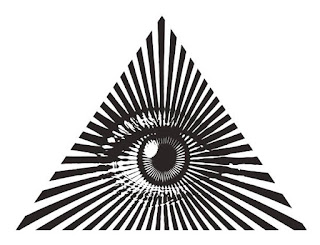 This is the third eye. The third eye is in the middle of the forehead. Occultic sects like the Eckankar, New Age, Hinduism, Buddhism, Taoism, Zen Buddhism, etc emphasize the development of the third eye. Once their third eye is opened, they will see into demonic realms and portals.
One day I encountered a demon in the name of Brahma. He has four faces and four hands. He is the demon of revelation. He is among those demons waiting in the demonic realms to deceive those with third eyes coming into those realms, giving them false prophecies, false visions, false hopes of salvation.
Christians can pray for their spiritual eyes to be opened. Praying in tongues for long hours may help one to open his spiritual eyes and see the work of angels and demons. When the spiritual eye is opened, one can easily minister healing and deliverance as he will be able to see where the demons are oppressing a person and cast them out, or where an angel of healing is ministering healing to a person and call out the word of healing or word of knowledge.
However, it is also possible that if such a Christian falls into sin, his spiritual eye can be diverted to see deceptive demonic realms where demons will masquerade as angels of light or some Biblical saints and give false visions and false prophecies and false revelations. 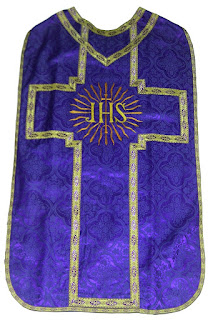 This cross you see here on the Catholic priest vestment have these letters IHS. IHS is the first three letters of the name “Jesus” in Greek. So, the IHS symbol means “Jesus” to the Catholics and other denominations that use this Christogram.
But this is a deception foisted on these churches to carry the names of the Egyptian gods. When Satan and his demons see this sign IHS, they consider such churches as belonging to them.
IHS is the abbreviation of the Egyptian gods Isis, Horeb, Seth. The fourth letter O that stands for Osiris is symbolized by the circle of rays around the letters IHS.
In Egyptian mythology, Seth is portrayed as the usurper who killed and mutilated his own brother Osiris. Osiris’s wife Isis reassembled his corpse and resurrected her dead husband long enough to conceive his son and heir Horus. Horus sought revenge upon Seth, and the myths describe their conflicts.
In some circles (not depicted above) it is written, “You all come to me.” What does it mean? It is a call to the gods of ancient Egypt. 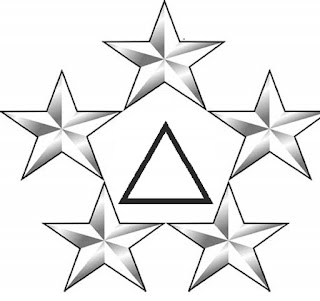 This is a sign of a false church well known in the country. It is a triangle with these five stars which are five demons giving them revelation or divination. When one of their ministers is ordained, they will put in him one of these five stars which are demons of divination or false revelation. If you go consulting him, he will reveal to you your life and what is hidden but it is not the Holy Spirit but demonic revelation. 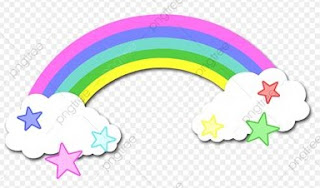 This hand sign here is a Freemasonry sign. The “devil’s horn” signal signifies that Satan rules.  Remember that Satan is called the “Horned God”, and the hand signal is formed so as to resemble horns.
It is a universal hand signal used by politicians, celebrities as well as heavy metal bands, affirming their allegiance to satanic powers and a visual shorthand for “Hail, Satan.” The devil’s hand has been observed and photographed around the world, used by George Bush, Bill Clinton, Silvio Berlusconi, Elizabeth Taylor, Prince William, Paul McCartney, Metallica, Ozzie, Avril Lavigne, Stephen Dorff, Dave Navarro and many others. Even the Popes have used this sign, thinking it means “I love you” but they are unconsciously giving a salute to Satan. 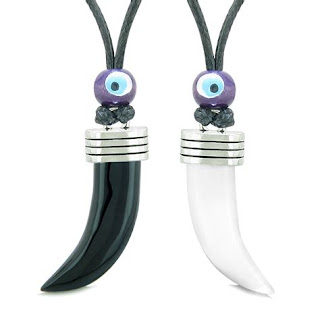 I ASKED JESUS ABOUT A DIVORCED PASTOR
A FORMER WITCH TELLS HOW SHE DESTROYED CHURCHES WITH FALSE GIFTS OF HEALING
TATIANA OF MOSCOW |  NO ONE SHOULD APPEAR BEFORE THE LORD EMPTY-HANDED
ELISABETH WIDYAWATI HERMAN OF INDONESIA 1  40 DAYS WITH JESUS IN HEAVEN AND HELL
BATTLING THE QUEEN OF SERPENTS, BAPHOMET AND MOLOCH
SISTER TOUN PRAISE OLUJUWON 2 |  I SAW HEAVEN
OBINNA AKUKWE OF GHANA 4 NEW STYLE PROPHETS AND THEIR VISIONS OF PHONE NUMBERS, BANK DETAILS AND LA...
I SAW HITLER, PRINCESS DIANA AND SALOME IN HELL. USA WILL START THE 666 GOVERNMENT.
ELLIOTT L. VERE | VISION OF THE SWORD AND THE SERPENT (1970's)
KEVIN ZADAI OF USA 5  THE SECRET PLACE EPISODE 5 THE BENEFITS OF BEING IN THE SECRET PLACE
SISTER ESTHER EUGENIE OF FRANCE 1 |  CONFESSING PAST SINS AND SEPARATING FROM BEAUTY PRODUCTS
SUE MARK JONES OF USA (INDIA)  MY VISION OF A SECTION OF HELL AND THE LORD WARNED ABOUT SEXUAL SINS...
PASTOR HELDER LUEMBA OF ANGOLA 8
SATAN’S STRATEGY BEHIND THE PANDEMIC LOCKDOWN
ASTON ADAM MBAYA OF CONGO 33  JEZEBEL IS THE REASON FOR 25 PERCENT OF WOMEN IN HEAVEN
Post Views: 135
READ ALSO  MY 25-DAY FAST PART 4: THE UNFAITHFUL CHRISTIANS IN HELL, THE SLEEPING CHURCH ON EARTH AND MY VISIT TO HEAVEN
Powered by Inline Related Posts